In conditions of self-isolation, gaming services recorded a multiple increase in the number of users and revenue as a result of the transfer of employees of many companies to remote work. User spending on video games hit a record $ 10 billion in March, according to a SuperData study. Spending on games for consoles increased from $ 883 million in February to $ 1.5 billion in March, while spending on games for personal computers grew 56 percent to $ 567 million in the same comparison.

Console and computer games are generally popular in Europe and North America, where restrictions on movement were tightened in March due to a pandemic. On the SuperData blog, experts note that during the crisis, games have become reliable popular entertainment, and for social interaction is carried out in multiplayer online games.

According to the company, the total revenue from video games for the month increased by 11 percent compared to the previous year. 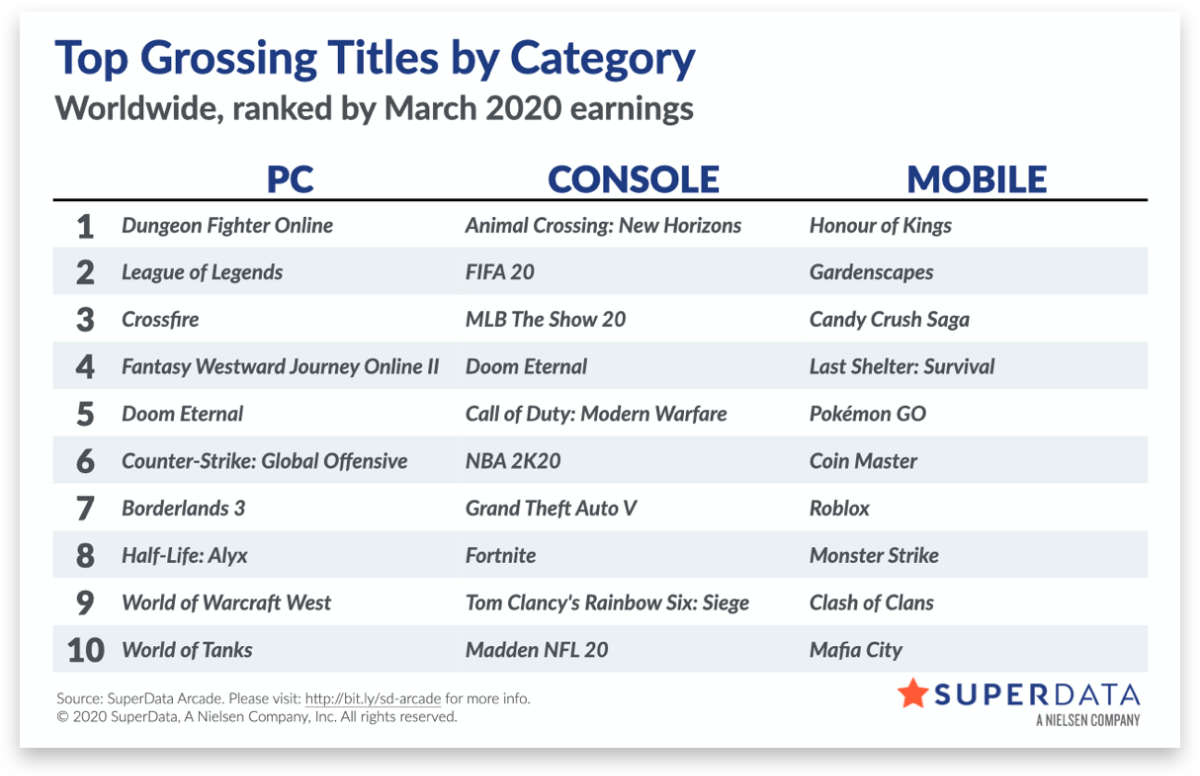 Nintendo sold five million copies of Animal Crossing: New Horizons in March, becoming the best-selling digital game in one month. This is a record in this category. Earlier, the absolute indicator belonged to Call of Duty: Black Ops 4.

In March, Doom Eternal was among the most popular console games in fourth place. At the same time, the game took fifth place in the segment for the PC. Shooter sales amounted to three million copies, which is three times more than Doom 2016 in the month of launch (957 thousand digital copies).

In March, Blizzard launched the shareware Call of Duty: Warzone, increasing monthly active users by 159% over the previous month, to 62.7 million.

The closure of physical stores in connection with the pandemic was called one of the factors that influenced the fact that gamers began to buy more digital games.

Expenditures on mobile games grew by 15 percent year on year - many users played on smartphones, revenue from the mobile segment in March reached $ 5.7 billion.

Among the revenue leaders in this category is the seemingly forgotten hit "Pokemon Go". The developer of Niantic has changed some functions to make the game easier and more comfortable to play without having to be outside. As a result, revenues increased 18 percent in March to $ 111 million.

A new generation of Xbox and PlayStation consoles, as well as games adapted for new hardware, are expected to be released by the end of this year. Microsoft has already unveiled the name and image of the new gaming console - the Xbox Series X. Meanwhile, Sony is preparing to release a powerful PlayStation 5.

However, the consoles face a potential threat associated with the emergence of "cloud" games. Earlier this month, Google made the Stadia cloud service, which is considered one of the flagship projects in the industry, free.

Launched at the end of last year, Stadia allows you to play games for consoles and PCs without having to buy expensive equipment - all the calculations are done on Google’s servers, and the consumer gets a ready-made “picture” in a special application (which can be run on almost any equipment) or even right in the browser.

The media reported the death of Kim Jong-un